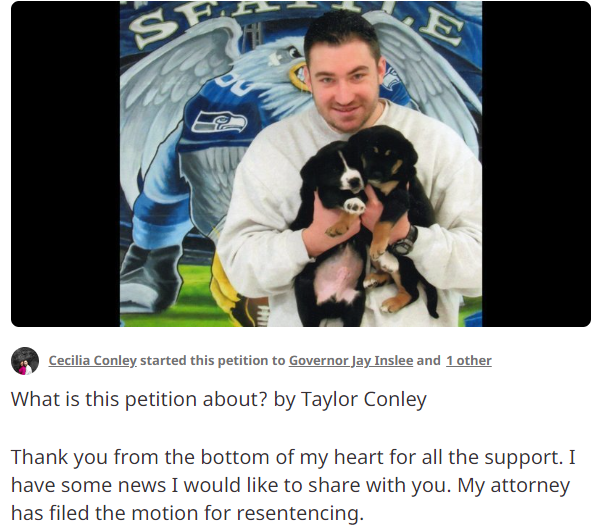 Taylor is serving LWOP since the age of 20 he is rehabilitated, we ask for a release date.

What is this petition about? by Taylor Conley

Thank you from the bottom of my heart for all the support. I have some news I would like to share with you. My attorney has filed the motion for resentencing.

I want to clarify to anyone what the resentencing pertains to. I was under the age of twenty-one when all this occurred. Therefore my case is being considered based on my age, being so young. The court will be looking into mitigating factors of youth. I am now waiting to be evaluated by an expert and have my childhood and adolescence analyzed to determine an appropriate sentence.

This petition’s purpose is to say that you support me getting resentenced to something less than life without parole. I have served 16 years; if I were to get out tomorrow, I have a solid plan for what I will do. A place to go living with my wife in our house. Working in the business, we created together, and being a father to our child that my wife is pregnant with from our conjugal visit.

I understand that I may not get out tomorrow; it may be 10 years down the road, or more. It all depends on what the court decides. I will continue to stay prepared for release so that I will be ready to handle it when that day comes.

There have been questions about my case details, and to be as transparent as possible, we have made the trial available for folks to watch if they want to. It is available on the channel my music page.

Taylor Conley has served almost 16 years of a life without parole sentence; he doesn’t have a release date at this time meanwhile, his co-defendant received a plea bargain for less than 20 years and will get out within the next couple of years.

A recent change of law is giving Taylor another chance. Taylor may be going back for resentencing. At this time, it would be up to judge to consider his mitigating factors of youth of which Taylor has a strong case and consider his rehabilitation, all of these are explained below.

Taylor Tom Conley – From Troubled Teen Industry to Life in Prison
Today, Taylor Tom Conley is best known as the founder of Designed Conviction LLC, a social enterprise that includes a magazine, publishing company, and record label. Currently incarcerated in a Washington State prison serving a Life without Parole sentence, Taylor’s life has become one of growth, repentance, and redemption.
Growing up, Taylor never had it easy, and as the years passed, he fell into a terrible cycle that still haunts him to this day. At the tender age of five, Taylor’s parent’s divorced, creating a tense and difficult environment for him. As a child, his youth was spent in and out of counseling sessions, diagnosed with ADHD, and eventually slipped into early dependence on drugs and alcohol. Without a stable homelife and surrounded by negative influences, he then became locked in a downward spiral that led to time in juvenile detention and then the ‘Youth at Risk’ program. Taylor was expelled from school at the age of fourteen, leaving him further abandoned and without direction.
At the age of fifteen, Taylor’s Mother learned of the behavior modification programs being operated through the Worldwide Association of Specialty Programs (WWASP). It was in this program, while Taylor was still just a child, that truly had a negative impact and would change his life forever.

Taylor’s traumatic events at Troubled Teen Industry
The horrific Worldwide Association of Specialty Programs (WWASP), practices were built on Inhumane, degrading discipline, denial of full access by parents to their children in residence, conversion and aversion therapy, sexual assault, harassment, grooming, and staff/student sexual relationships, and a multitude of human rights violations.
While the WWASP programs were later shut down due to the abusive conditions, the torture Taylor endured has left permanent scars, and tragically, he’s not the only one. Multiple lawsuits have been filed against the company alleging abuse and fraud, the most notable being a joint action lawsuit on behalf of over 350 plaintiffs alleging physical and sexual child abuse as well as various acts of fraud and racketeering. Recently, victims of WWASP have joined forces to create the WWASP Survivor’s community, a dedicated group striving to raise awareness of the true dangers of WWASP Programs, advocate for those still being held and abused in WWASP programs, and to provide validation and support to survivors of WWASP programs.
While WWASP is now thankfully defunct as an organization, its legacy abides, and countless survivors are now bravely speaking out against the program, including Paris Hilton, who has detailed her abuse while held at a Utah facility for ‘troubled teens’.
Taylor’s formative years were dogged by a haze of trauma, hardship, and pain, and the systems meant to protect him failed him time and time again.

Trauma, desperation, and tragedy
After being returned from the program, Taylor was cast adrift, unable to return to school or a normal life. Suffering the PTSD and struggling with his ADHD, he soon found himself using hard drugs as a way to cope, and if it had not been for his friends, he would have found himself homeless. As Taylor’s addiction grew, he struggles only intensified, and it was only a matter of time until his desperation turned into tragedy.
At just twenty years of age, he was arrested following the murder in the death of Brian Swehla. It took the jury a total of 8 1/2 to reach their decision, condemning him to a life sentence without any chance of parole.

Redemption and Life After Sentencing
Since his incarceration, Taylor has been able to forge a new life for himself, working to become a productive member of society and even getting married to his lovely wife. Through his hard work, determination, and will to make amends, Taylor has been able to overcome the obstacles and traumas of his past, finally becoming the person he always had the potential to be. In his own words, “I haven’t wasted my life away in prison. Granted, the first five or so years were not good. After that, I grew up and became the man I am today. I am not proud of my past, but I am proud of who I have become despite my past.”

“I have since gotten married, and I spend my time with purpose and meaning working to become a productive member of society while still incarcerated. I ask and pray for the opportunity for redemption and to begin a process of restoration, forgiveness, and healing. I hope to be able to use my story and experience to prevent more tragedy while allowing me to work in a broken community to repair harm and stop more troubled youth from winding up like me.”
Today, Taylor has become a true inspiration, and even behind bars, he has been able to find a new direction in life. Studying, working, and taking ownership of his life, Taylor has made a new mark as a songwriter, artist, author, and more, and his personal growth is a testament to his determination.

There is Hope for Taylor
Recently, in the matter of Kurtis William Monschke and Dwayne Earl Bartholomew (Wash. Mar. 11, 2021), two youths who were each convicted of aggravated first-degree murder and sentenced to life in prison without the possibility of parole, the Washington Supreme Court ruled that it was unconstitutional to sentence a youth to a mandatory Life Without Parole sentence, without first considering the effects of their youth. In the ruling, the Court stated, “The character of a juvenile is not as well-formed as that of an adult,” and “qualities that distinguish juveniles from adults do not disappear when an individual turns eighteen.”

It was a landmark decision, but it wasn’t without precedent. In recent years, there have been a series of decisions in which the Supreme Court of the United States established and upheld the fact that “children are constitutionally different from adults in their levels of culpability”, namely Roper v. Simmons (543 U.S. 551), Graham v. Florida (560 U.S. 48), Miller v. Alabama (567 U.S. 460), and Jones v. Mississippi (593 U.S.). In each of these incidents, the Court determined that it mandatory sentences of life without the possibility of parole are unconstitutional for juvenile offenders.

The reason for these rulings were based on a range of factors, including juveniles’ lack of maturity, propensity to take risks and susceptibility to peer influence, mental illness and victimization, and their unique capacity to be rehabilitated. Because of their developmental immaturity, impetuousness, and susceptibility to negative peer influences, youths are less blameworthy for their criminal conduct than adults. Research also shows that most youth will naturally grow out of criminal behavior by their mid-twenties, and life without parole sentences keep youth in prison well past the point at which they have been rehabilitated and well beyond any reasonable risk of re-offending. Moreover, many juvenile lifers, those both inside and out of prison, are leading exemplary lives. They are leaders within the prison walls, and many of those who have returned home have dedicated themselves to working with youth and keeping their communities safe.

Under the Washing Constitution, Life Without Parole sentences for juveniles have been determined to be impermissibly cruel, and the Supreme Court has further ruled in a 5-4 majority that the Eighth Amendment’s prohibition against cruel and unusual punishment forbids the mandatory sentencing of life in prison without the possibility of parole for juvenile homicide offenders, citing that “children are constitutionally different from adults for sentencing purposes”, and while a mandatory life sentence for adults does not violate the Eighth Amendment, “such a sentence would be an unconstitutionally disproportionate punishment for children”.

Based on these rulings, Oregon’s Gov. Kate Brown is considering clemency for hundreds of people who didn’t benefit from recent legislative changes to Oregon’s youth sentencing laws. The changes would mean that people who are serving prison sentences of at least fifteen years might receive a parole hearing, where they would have a chance to earn release by proving that the harm they caused as kids, however serious, does not reflect the character of the adult they’ve become.

Closing Words of Remorse
On his website and in his letters, Taylor has outlined an impressive re-entry plan, and made a heartfelt plea in which he looks to make amends. Repentant, remorseful, and filled with hope, his words need to be heard.
“I want to first apologize for all the wrong I have done and the harm I have caused. As well as take responsibility for my actions. In addition, I want to express a great sense of remorse I feel, and not a day passes in which I am not ashamed. This whole period of my life is a cloudy drug-filled haze that I am not proud of. There was never any intent for this to happen, but I put myself in this place because of my bad decision-making. There is nothing that I can do or say to turn back the hands of time on what has already been done. Living with this burden all these years has weighed heavy on my soul.”