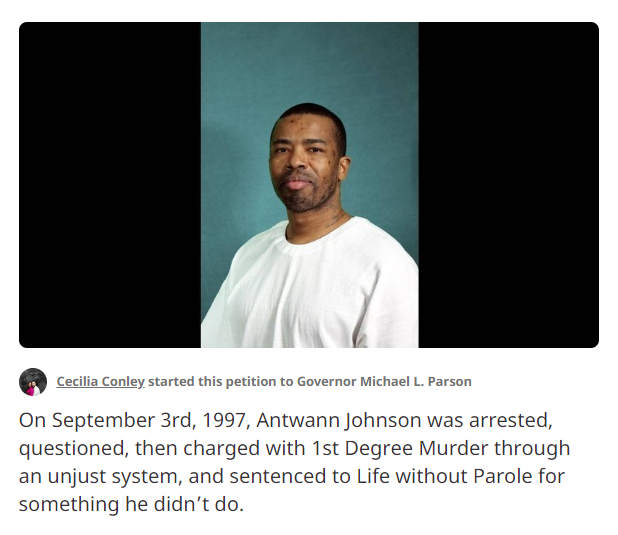 On September 3rd, 1997, Antwann Johnson was arrested, questioned, then charged with 1st Degree Murder through an unjust system, and sentenced to Life without Parole for something he didn’t do.

Young and confused
At the time of his arrest, he was only 21 years old. He felt lost, confused, and after 9 hours of harsh interrogation, he confessed to a crime that he did not commit. The detectives frightened him by constantly stating that he was facing the death penalty for committing the senseless murder of Michael Martin, a 40-something-year-old white male. The detectives told him that they considered him nothing more than a “young, black street thug.” At one point, a physical altercation even ensued during the interrogation.

Unreliable witness
They showed him a video of Terry Edwards (a man who would turn out to be the state’s star witness in the trial) falsely describing how Antwann had supposedly shot the victim twice in the head at close range.

Coerced Statement
After being interrogated for hours on end, Antwann desperately wanted to leave the presence of the detectives. While under an extreme amount of stress, Antwann implicated himself, even though he could not, at the time, tell them who exactly got shot or if anyone had gotten injured during the alleged shooting. All he stated was that he had shot into the victim’s gangway and ran. Once Antwann was taken to the processing and booking building, he recanted everything he had previously told the detectives, but it was too late by then.

Trial: Key Points
– Terry Edwards took back his statement of Antwann’s involvement, and no other witnesses were linking him to the crime.
– The state built their case around the videotaped statement and his coerced confession due to his fear and exhaustion.
– Portions of his statement on videotape were erased and edited by the detectives. The detectives claimed that they experienced some degree of difficulty with the tape but gave no apparent reason for a gap and a time-lapse in between portions of Antwann’s statement on it.

Unfortunately for Antwann, after three days and 2 hours, the jury came back with a guilty verdict in the case.

Missing Witness
A witness for the state in the case was killed after going to the police
Patricia Bailey, the state’s key witness in their case against Antwann, went to the Circuit Attorneys’ Victims Unit 30 days after Antwann’s arrest and told them that she failed to mention a crucial piece of evidence because she was being threatened not to do so. She stated:
1- On the night of the murder, she had witnessed a man by the name of Hashane Harris standing over Michael Martin’s body going through his pockets as he was lying on the ground in the gangway of his residence.
2- Hashane came to her house, three buildings down from where the crime occurred, a short time after the encounter.
3- While at her residence, Hashane gave Terry Edwards approximately $25-$50 of the victim’s money.

One week after Patricia came forward with this information, she was found dead.

Key evidence withheld
Realizing that Patricia witnessed the murder trial, they conducted an investigation that included re-interviewing Terry Edwards. Terry told them that Hashane had indeed given him some of the victim’s money that he had stolen and that Hashane had confided in him that it was a robbery that had gone bad.
Stanley Green’s statement (an additional witness statement obtained through the Sunshine Act) supports this; Stanley stated that Hashane was upset about Patricia testifying before a Grand Jury as to what she had seen. Green claimed that Bailey’s death was an accident.
Hashane later admitted going through the pockets of the victim, but not to the murder. Contrary to Antwann case, evidence shows that Hashane Harris had both motive and opportunity to commit this crime. He admitted to being present during the murder and robbing the dead body of Michael Martin. Still, the prosecutor and detectives decided to ignore this new lead and proceeded with the trial Antwann due to his coerced confession.
All this new evidence was unknown until recent years, and this shows that Antwann did not receive a fair trial. The jury decided his future based on a coerced statement that the detectives further edited and manipulated to make their case. That, combined with the fact that the state purposely withheld information, was a gross manifest of injustice.

A note from Antwann
I’ve written over 500 letters seeking assistance from different sources but have received little to no aid because, as one reporter told me, my confession makes it hard for people to believe my innocence. One of the most unfortunate aspects of my situation is that no one has taken the time to examine the validity of my statement or any of the other information that I have expressed to you. Had it been provided to me before trial, I know that I would not have been found guilty. Especially if I had not just told the detectives what they wanted to hear and maintained my innocence when interviewing me, this is one of my biggest regrets. I pray to eventually find someone willing to work with me towards securing my freedom by uncovering and revealing the truth about my innocence to the courts.

Please become a supporter of the “Fight for Antwann” campaign…
Thank you in advance for your time and consideration!